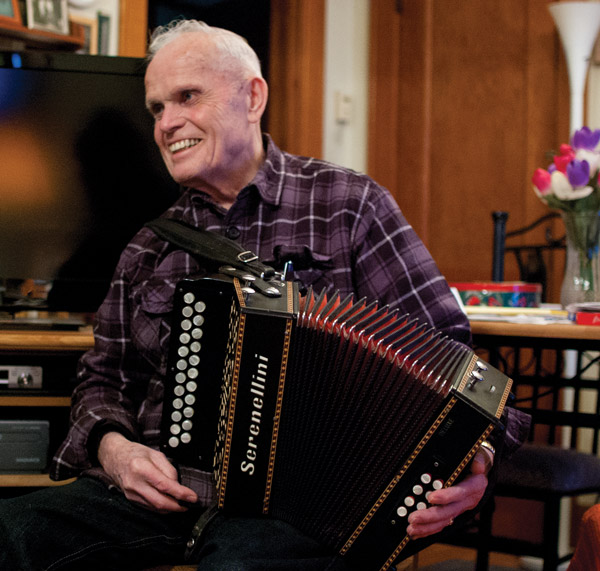 Martin McHugh, master accordion player and well-loved keeper of Irish tunes,is recognized for his role in sustaining and fostering Irish music around St. Paul, Minnesota during the 1960s and 1970s and remains a strong and influential presence today. Originally from Castlerea, Co. Roscommon in Ireland, Martin has inspired and encouraged a great number of the musicians who make the Twin Cities such a lively Irish music scene. His music, musicianship and good humour have enlivened many a session, fueled many a player, stirred many a dancer’s foot, and gladdened many a heart.

Martin emigrated from Ireland as a teenager and found a thriving traditional music community in St. Paul. By the early ‘70s, some of the old-timers had passed away, and he found himself surrounded by a new generation of traditional music enthusiasts.

Martin has been a mainstay of the Irish music sessions (informal gatherings of traditional musicians playing together) in a variety of locations, from O’Gara’s in the ‘70s to the current session at Keegan’s Irish Pub. Storyteller Michael Hartford fondly remembers the sessions at the old Irish Well in St Paul. According to Michael, “Martin would come in early, and would be at the table, squeezing out jigs and reels. Other players would wander in and follow Martin’s lead, picking up with fiddle and flute and bodhrán his threads of music. With closing time approaching, Martin would still be at the table, still playing as the others took their leave. It was as if he was the solid rock of Irish music around which the waves of the session flowed.” Martin’s tunes still make up the basis for many of the sessions in the Twin Cities. 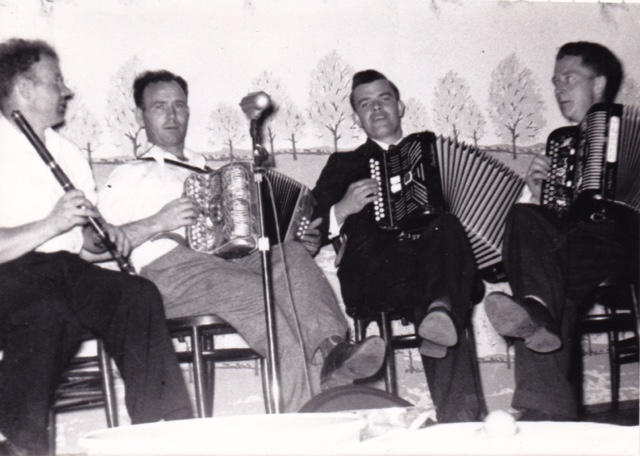 Martin has mentored and encouraged a great number of the musicians who make the Twin Cities such a lively Irish music scene. So many of these players owe their love of traditional Irish music, and the tunes they know, to Martin. He was also a significant presence making music for céilís (social dances) in the 70’s and 80’s, both informally and as part of the Northern Star Céilí Band (originally the Plough and Stars Céilí Band). Many a young musician polished their skills in order to play with Martin at these gatherings.

Martin continues to learn new tunes and write tunes as well. He travels back to his family home in Ireland every year, playing with and even influencing the musicians there. Although he spends about half his time back in Castlerea, County Roscommon, “the mighty Roscommon box player” still plays locally with his band Tara Hill and at the weekly sessions whenever he’s in town. His music and musicianship continue to be of immeasurable value for our Minnesota community and beyond.

(adapted from the Curtin-Conway awards, an annual award presented by the Irish Fair of Minnesota to a person who has made significant contributions to the Irish cultural community, awarded to Martin McHugh in 2003)

“You could be right…”

I’ll never forget March 1975 and the St. Patrick’s Day Céilí in St. Paul’s old Commodore Hotel, where almost overnight a Twin Cities Irish music and dance scene was born. The music was from The Dayhills, with their guest accordion player, Martin McHugh. It was Barb and Tom Dahill’s persistence that had tracked Marty down, the last survivor of a once thriving St. Paul traditional music scene. The music that night changed my life, and it wasn’t just me. From that moment forward, there was a posse, a gang, an inseparable band of budding musicians and dancers that traveled as a pack, and Marty was our fearless leader in all things Irish. We joked about all having had ‘the dream of St. Patrick’ that night, and we were besotted, but with shamrocks instead of stars in our eyes.

Young Irish musicians in the Twin Cities may take for granted all the resources available to them now: a school of Irish music, a cultural center, a number of pubs, many bands, lots of dance schools and instructors, an Irish festival, and access to many fine musicians. But once upon a time, there was only one dance group and one band and one céilí instructor. And Martin McHugh.

Marty was our link to the real deal, the memory bank that connected us to the living tradition that is Irish music. He taught us more than just a body of tunes, with his often unusual versions. He taught us the context, what it was about.
Without ever saying it, he made us understand that it wasn’t just how many tunes you knew, or how fast you could play them, or being a ‘star’. It was every bit as much about the laughter, the stories and tall tales, the dancers and the listeners, and having the ‘craic’. It had to be fun or what was the point? And then, it had to be music, not just notes. It had to make people want to dance.

Perhaps most importantly, we learned what it was to be inside a tradition. It was about sharing it, passing it on, becoming a part of a continuum, something bigger, more meaningful and longer lasting than any individual achievement. What Marty taught us can’t be learned off the internet, can’t be gleaned off CDs, can’t be read in a book: it requires actual human interaction, the human transmission of culture.

One of Marty’s favourite catch phrases when in doubt was always, ‘you could be right’. Well, Marty, you were, and are, most definitely right! What would we have done without you?